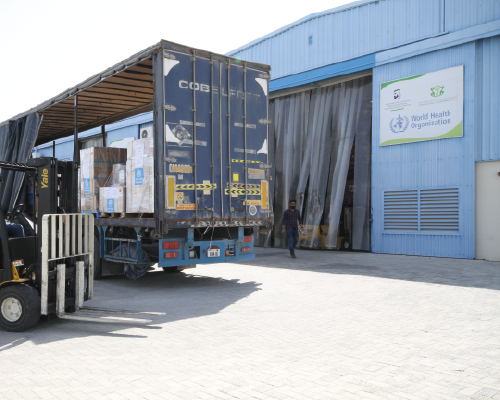 A cargo plane filled with vital medicines and relief supplies left Dubai earlier today for Libya’s eastern city of Benghazi. The aid will be distributed to most affected areas across the country, where large numbers of people have been forced to flee, and more than 30 people have been killed due to the outbreak of bloody clashes in Tripoli, Libya’s capital.

Giuseppe Saba, Chief Executive Officer of IHC, said: “This is not the first time we have established air bridges to the African continent. In line with the directives and vision of the UAE’s wise leadership and the express instructions of His Highness Sheikh Mohammed bin Rashid Al Maktoum, Vice President, Prime Minister of the UAE, and Ruler of Dubai, our approach to humanitarian emergency preparedness and the response has become increasingly proactive and solution-driven. We are working to uphold a swift and effective response to crises prompted by natural and artificial disasters in areas that are often beyond reach. It is unfortunate that the situation in Libya has worsened, and our action now comes in support of our long-standing partner and member, WHO.”

Reports from Libya indicate that large numbers of people have been injured in the conflict.  Hospitals and medical centers have also been attacked and damaged. The WHO’s Representative in Libya, Elizabeth Hoff, explained: “Acute shortages of medical specialists, medicines, and emergency supplies have left tens of thousands of people at grave risk of illness or death in Libya. Many people unwittingly caught up in the recent fighting have simply been unable to obtain emergency treatment because hospitals have run out of trauma supplies and other essential medicines.”

“Thanks to the generosity of the Government of Dubai and His Highness Sheikh Mohammed bin Rashid Al Maktoum, these supplies will help improve the health outcomes of some of the most vulnerable people globally,” she added.

As the world’s largest humanitarian hub, IHC plays an instrumental role in facilitating swift and efficient responses to emergencies and crises around the globe. Home to more than 80 United Nations agencies, international non-governmental organizations, intergovernmental organizations, and commercial companies, IHC’s unique model and strategic location in Dubai allows the rapid distribution and transport of relief and humanitarian aid shipments to all corners of the world through effective coordination, transport, and logistics, building on Dubai’s position as a global humanitarian center of logistics excellence.