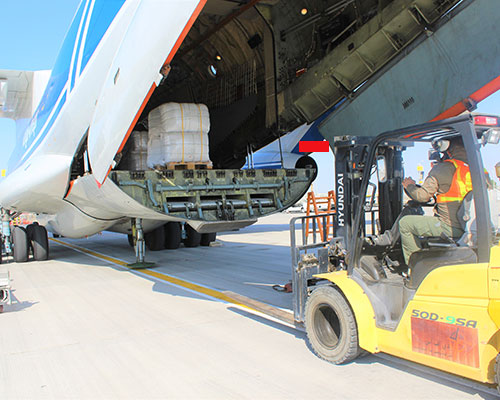 8 December 2019, Dubai, UAE: The UAE Ministry of Foreign Affairs and International Cooperation, in collaboration with International Humanitarian City (IHC), today airlifted life-saving supplies to victims of the Albanian earthquake. Recently, a 6.4 magnitude earthquake struck Durres, Albania, claiming more than 50 lives and damaging critical infrastructure, in addition to leaving more than 12,000 people homeless. The recent drop in temperature throughout Albania has threatened the homeless population and other vulnerable groups affected by the earthquake, which was the most destructive to hit Albania in four decades.

Relief items provided by the UAE Red Crescent, International Federation of Red Cross and Red Crescent Societies, and the United Nations High Commissioner for Refugees include tents, medicine, and other non-shelter items. The first UAE aircraft filled with relief items arrived in Tirana early this morning with supplies for the Albanian Red Cross Society, as organized through the UN Emergency Relief Coordinator. A second UAE aircraft will arrive in Tirana on Monday, with a third shipment to follow as required.

The shipments are being coordinated by Dubai’s International Humanitarian City (IHC), which has dispatched the “Flash Studio” to document conditions on the ground. Funding for the airlifts is provided by the UAE Ministry of Foreign Affairs and International Cooperation.

Assistant Minister for International Development H.E. Sultan Al Shamsi highlighted the urgency of the aid, stating: “Due to the damage caused by the earthquake, compounded by worsening winter conditions, we are racing against time to ensure that the families who lost their homes and loved ones in this emergency do not suffer further. The UAE is committed to the timely provision of emergency supplies to keep those affected warm and secure, with a priority on vulnerable groups, especially women and children.”

Following the delivery of the first shipment, IHC’s CEO Giuseppe Saba met with Albanian ambassador Ermal Dredha for a courtesy call during which he expressed on behalf of IHC and its members, condolences for the Albanians who have suffered and lost their lives. Mr Dredha comments, “On behalf of the Albanian Government and people, I would like to share the sincerest appreciation for the Government of the United Arab Emirates’ aid. In particular, I would like to thank His Highness Sheikh Mohamed bin Zayed Al Nahyan, Crown Prince of Abu Dhabi and Deputy Supreme Commander of the Armed Forces of the UAE, for the prompt response in support of the Albanian Nation.”

Mr Guiseppe Saba, CEO of Dubai’s International Humanitarian City, added, “The UAE is committed to assisting Albania in this time of need. We are working with urgency to provide the winterized emergency supplies to those affected in as timely of a manner as possible in line with humanitarian principles.”