Home100,000 people in the UAE unite to ‘Stand Up & Speak Out’ Against Poverty 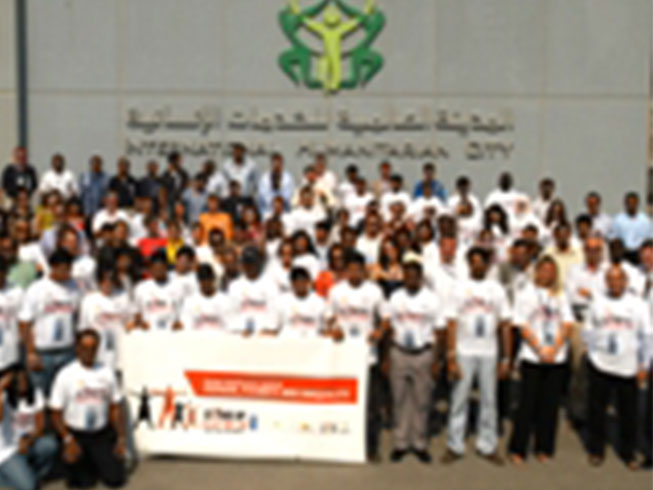 Over 100,516 people from all walks of life registered to participate in the “Stand Up and Speak Out Campaign” in Dubai, Abu Dhabi, Fujairah and Al Ain. Schools, companies, governmental institutions and humanitarian organisations joined millions around the world to raise their voice against poverty and inequality.

This year the United Nations hopes to break last year’s record of 23.5 million people standing up within a 24-hour period. The United Nations recognises October 17th as World Poverty Eradication Day and on this day, in a two-minute pledge, people remind their governments to recommit to the goals set by the United Nations Millennium Development Campaign to end poverty and inequality around the globe.

The largest single group that registered for the Campaign in the UAE is the Al Habtoor group of companies, with 25,000 employees committing to the cause. They were joined by 2500 students from St. Mary’s Church and another 7000 from the ETA Group of Companies.

In the UAE, this event was organised by the United Nations Development Program (UNDP) along with IAHV and the Art of Living. The “Stand Up and Speak Out” Campaign comes with the endorsement of HRH Princess Haya Bint Al Hussein, UN Messenger of Peace and the International Humanitarian City.

Referring to the Campaign, Dr Khaled Alloush, UNDP Resident Representative and UN Resident Coordinator in the UAE, said “ Successful cases demonstrate that MDGs can be attained, only if, concentrated additional actions are taken immediately and sustained until 2015, especially the financial support from developed to developing countries. On the other hand, achieving MDGs requires the full commitment and collaboration of governments, UN and other multilateral organizations, NGOs and the private sector.”

Addressing the press in a televised message, HRH Princess Haya Bint Al Hussein, UN Messenger of Peace and Chairperson of the International Humanitarian City said, “We live in a world that is driven by the communication age, so many causes and crusades remain to a certain extent peripheral to peace. We must recognise that hunger is a grass roots issue and a root cause of social unrest. I am honoured to add my energy to a community that fights for making a better world for our children.”

Speaking of the mammoth effort that went into the organising of the event, Rugmani Prabhakar, Country coordinator IAHV, says, “Hundreds of volunteers from the IAHV and the Art of Living worked days and nights throughout an entire week to ensure that participants properly register, collect their Pledge and campaign ribbons and send photographic evidence and a report with the final number of participants to the organisers.” Sri Sri Ravishankar, the founder of Art of Living and the International Association for Human Values has said that such participation was essential to the success of the campaign. He said, “All the nations of the world have come together and have set up eight Millennium Development Goals, and it will remain just a dream if we don”t stand up and participate.”

Photograph: The entire IHC community – including UN agencies, NGOs and companies members of the IHC, HRH Office team, IHC team, secury guards and gardener – gatherered to “Stand Up & Speak Out” against poverty and inequality on October 17th.