Home18 Million People in Arab countries STAND UP for the MDGs

18 Million People in Arab countries STAND UP for the MDGs 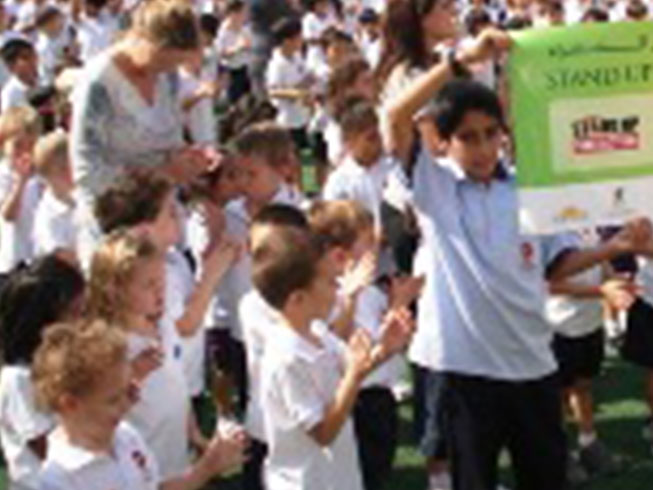 The concern of the Arab people in speedy implementation of the Millennium Development Goals (MDGs) came to the fore as the global Stand Up sessions came to a conclusion with nearly 18 million people in Arab countries endorsing sustainable development goals.

According to the UN, 2 per cent of the world population – nearly 117 million people in 131 countries – stood up last weekend as part of its campaign to demand that world leaders keep their promises to halve extreme poverty and achieve the other Millennium Development Goals (MDGs) by their target date of 2015.

The UAE which took up the seventh MDG of sustainable living and environment saw close to 140,000 people standing up in solidarity for a green earth under the Mission Green Earth – Stand up and Take Action 2008″ campaign. At the last count, Dubai alone recorded one in 11 residents of the emirate endorsing the sustainable living and environment goals.

Commenting on the response from Arab countries and the UAE’s share of voice in the global campaign, Rugmani Prabhakar, Executive Director of the International Association for Human Values (IAHV), one of the organisers of the Mission Green Earth campaign said: “Going by the huge response to the UN campaign, it is indeed a moving reality that so many of us in the UAE and the Arab world recognizes the need to pursue development goals in relation to environment and sustainability with responsibility and prudence. We do believe that the Mission Green Earth campaign, which is part of the global campaign for MDGs, would lead to the UAE government taking positive steps to protect environment and promote sustainable living.”

Interestingly, according to the UN data on the campaign, over 73 million people in Asia, followed by Africa with more than 24 million stood up for MDGs.

In the Arab world, some 400,000 students in the West Bank and 200,000 in Gaza stood up as part of an annual programme to teach them about the MDGs.

Reflecting on the UAE campaign and its positive ramifications to the society, Elise Bijon, Communications Officer, IHC, said: “We believe that the UAE has echoed a very strong united voice for a quick pursuit to fulfill the MDGS – in our case sustainable living and environment – by a huge number of people from all walks of life coming together to Stand Up for the green cause. The gesture is also a strong reflection on the people of the UAE in joining for causes that matter to the global community in general, apart from contributing to the voice of concern over matters of sustainability and environment at home.

In the UAE, the Mission Green Earth campaign was held under the patronage of UN Messenger of Peace HRH Princess Haya Bint Al Hussein, Wife of HH Sheikh Mohammed bin Rashid Al Maktoum, Vice President and Prime Minister of the UAE, Ruler of Dubai, with the support of UNDP, UNEP the International Humanitarian City (IHC) and Barclays Bank PLC.

Among the thousands of people who took part in the Stand Up in the UAE included 68,039 from schools, 45,262 from companies and organizations, 5,170 people from communities and social clubs and 17,833 from the general public who participated in Stand Up sessions in malls, super markets and in individual capacity. Dubai reported the largest participation with 99,018 people standing up for a greener future while others included 11,868 people in Sharjah, 6,679 in Abu Dhabi, 1,880 in Al Ain and 497 in Fujairah.