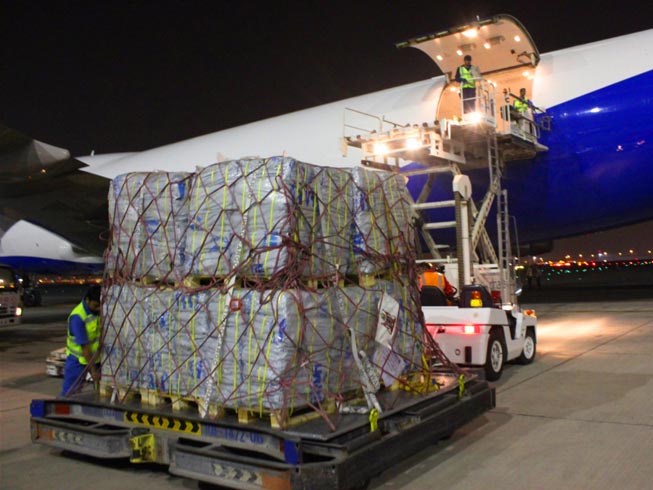 His Highness Sheikh Mohammed Bin Rashid Al Maktoum, Vice-President and Prime Minister of the UAE and Ruler of Dubai has announced three additional airlifts of a B747 aircraft to send humanitarian aid to the Rohingya refugees in Bangladesh from Dubai’s International Humanitarian City (IHC).  The airlifts will deliver supplies provided by the United Nations High Commissioner for Refugees (UNHCR) and the UN Humanitarian Response Depot (UNHRD) and are being made at their request.  Flights are scheduled for 6, 11 and 13 December 2017 and will be loaded with urgently needed shelter supplies and other basic items for tens of thousands of people.

The cargo departing tomorrow, on Wednesday, the 6th of December, is made available by UNHCR at IHC. It consists of 100 metric tonnes of kitchen sets and prefabricated warehouses valued at USD 364,000 approximately (1,336,964 AED).

In the two months since the creation of the Bangladesh humanitarian air bridge by His Highness Sheikh Mohammed Bin Rashid Al Maktoum in late September 2017, ten relief aircrafts have been dispatched from Dubai to Dhaka, Bangladesh, on behalf of members of the IHC community.  They have delivered badly needed food and relief supplies valued at upwards of USD 3,390,000 (12,451,402 AED). The last airlift which took place last week, on 28 November 2017, transported 101 metric tonnes of food, clothes, blankets and other core relief items provided by the Emirates Red Crescent.

As nearly 650,000 Rohingya refugees remain in acute need of humanitarian assistance, the International Humanitarian City, with the strong support of His Highness Sheikh Mohammed Bin Rashid Al Maktoum and its Board of Directors chaired by Her Royal Highness Princess Haya Bint Al Hussein, has continued to keep the humanitarian air bridge open. It is thus providing regular, efficient and coordinated transport and warehousing support to IHC members to optimize their aid delivery in response to the fastest-growing refugee emergency in the world.