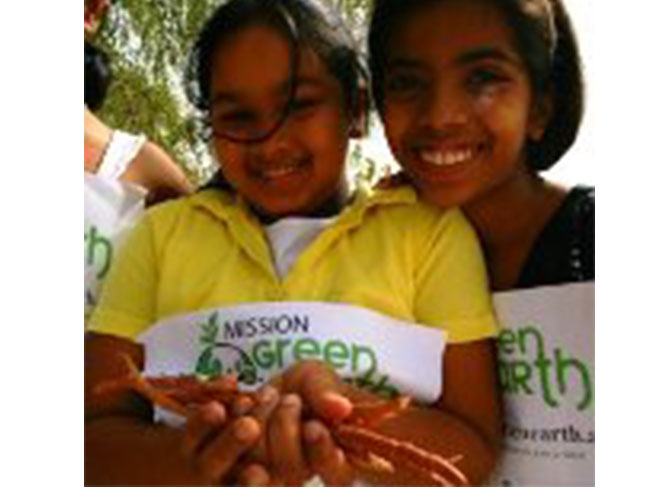 The “Mission Green Earth – Stand Up and Take Action 2008,” campaign has evoked huge response with Dubai Municipality, Parks and Recreations Department of Abu Dhabi Municipality, Knowledge and Human Development Authority (KHDA), Sharjah Airport Free Zone (SAIFZONE), a large number of companies from the corporate sector, educational institutions and health bodies, announcing their support to the campaign as it moves towards to its culmination on October 17, 18 and 19, 2008 in the UAE.

Organisers of the campaign, which is held under the patronage of UN Messenger of Peace HRH Princess Haya Bint Al Hussein, Wife of HH Sheikh Mohammed bin Rashid Al Maktoum, Vice President and Prime Minister of the UAE, Ruler of Dubai, with the support of UNDP, UNEP and the International Humanitarian City (IHC), today said the upsurge in response reflected that the UAE residents care for the environment and needs their government to follow sustainable development policies for a better future and a greener planet.

“Ever since the campaign has been launched, we have seen a number of entities in the UAE come forward to take part and this includes many companies from the corporate sector, salient educational institutions, health and hospitality institutions,” said Rugmani Prabhakar, country coordinator for the campaign.

She said registrations are pouring in and the momentum is expected to gather pace as the campaign moves towards its closing phase. “We are now in the process of consolidating our responses – there are hundreds of volunteers working hard on the campaign to speed up signing up for the Stand Up action,” she added.

Campaign organisers said the number of participants have been growing on an every day basis and includes corporate entities like ETA Ascon, EMKE Group of Abu Dhabi, Al Fara’a Group, BMW, Wafi Group, Jashanmal and Jumbo.

As part of the green initiative, Dubai and Abu Dhabi Municipality will be rolling out a drive to plant trees across the emirate while KHDA has pledged that public and private educational institutions under the authority will stand up in solidarity for the cause.

“We have sent several appeals to our network of volunteers encouraging them to support the Mission Green Earth campaign and have witnessed incredible good will and enthusiasm. The optimism that characterises this campaign, combined with the fact that it engages people to own the debate and take action in the context of their particular lives, businesses and environment, certainly contribute to the success of this campaign,” said Elise Bijon, Communications Officer, IHC.

The campaign organised by the Art of Living (AOL) and the International Association for Human Values (IAHV), with the support of Barclays Bank PLC and aims to mobilise and inspire people through a variety of activities planned in schools, organisations and institutions across the emirates.

As part of keeping up the momentum of environmental awareness, the United Nations Integrated Regional Information Networks (IRIN) in partnership with the “Mission Green Earth: Stand Up and Take Action 2008” organisers, also held a round table for UAE journalists to reflect on the Humanitarian Impact of Climate Change. A series of short films produced by IRIN was also screened at the event.

“The ultimate aim of the Mission Green Earth campaign is to foster a contextual debate on sustainable living and generate concrete changes in the UAE, at both individual and collective levels. It is about advocating individual and corporate social responsibility in the UAE and providing a platform for dialogue and debate in this sense, which makes the involvement of the International Humanitarian City so relevant,” Bijon said.

ONE CAMPAIGN – TWO CHALLENGES
This year’s campaign aims to mobilise and engage UAE residents, collectively and individually, in support of a sustainable environment through two challenges.

To participate and learn more about MISSION GREEN EARTH, go to.