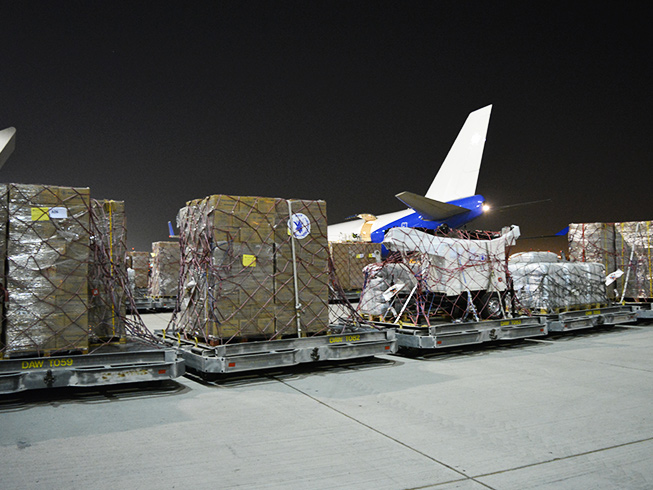 His Highness Sheikh Mohammed Bin Rashid Al Maktoum, Vice-President and Prime Minister of the UAE and Ruler of Dubai has provided, upon request from the United Nations World Food Programme and UNHRD partners, the B747-400 aircraft which flew out of Dubai International Airport at 4:30 am, September 7, to Port-au-Prince, Haiti airport. The plane is expected to land in Haiti tomorrow, the 8th of September 2017, at 8:00 pm UAE time.

The Dubai Air Wings aircraft to Haiti carried more than 90 metric tonnes of key relief items, valued at more than USD 194 000 (AED 712 500), made available by the International Humanitarian City members.
The air cargo transporting aid on behalf of the World Food Programme, Catholic Relief Services, and CARE came in response to the forecast of a monster storm, hurricane Irma, as it bears down South America, and is expected to hit the Dominican Republic, Puerto Rico, Haiti, and Cuba in the coming days.

Upon hearing about Irma, believed to be one of the most powerful Atlantic storms ever recorded, a quick mobilization was crucial to be able to reach the destination before any potential closure of airports. It was made possible thanks to the coordinated efforts of IHC and its members, under the chairmanship of Her Royal Highness Princess Haya Bint Al Hussein.

HRH Princess Haya hailed the emergency airlift as a symbol of the UAE commitment to humanitarian assistance. “This rapid response is the fruit of an unprecedented cooperation and a proof of our robust support to vulnerable populations all over the world,” she said.

Among the relief and survival items, on board are food and non-food supplies: 2000 tarpaulins, enough high-energy biscuits to feed 47100 people over 3 days, mobile storage units, lighting equipment, water purification kits, and pool testers.

This is the fifth relief plane sent in 2017 by IHC with the support of HH Sheikh Mohammed Bin Rashid Al Maktoum to crisis and disaster-stricken areas; earlier this year, aid was air dispatched to Madagascar, South Sudan, Uganda and Iraq.

Similarly, HRH Princess Haya flew last year in October 2016 to Haiti and personally oversaw the delivery and distribution of relief supplies after hurricane Matthew had demolished the island.