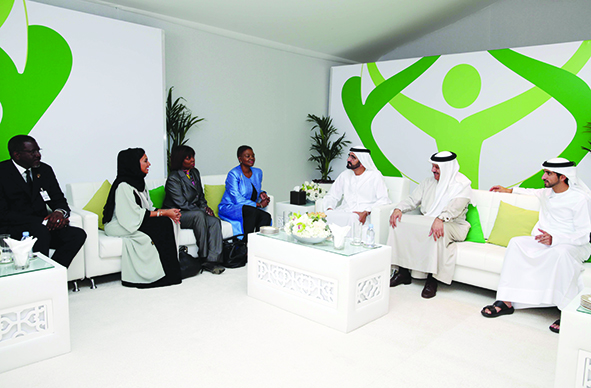 His Highness Sheikh Mohammed bin Rashid Al Maktoum, Vice-President and Prime Minister of the UAE and Ruler of Dubai, has launched the 2015 – 2021 strategy for the International Humanitarian City at its headquarters in Dubai.

Ban Ki-Moon, Secretary General of the United Nations, gave a recorded message expressing his sincere gratitude to the President His Highness Sheikh Khalifa bin Zayed Al Nahyan and Sheikh Mohammed bin Rashid for their exceptional humanitarian accomplishments. He also praised the UAE for its prominent role and its commitment to work with the UN while providing vital logistical and financial support. He went on to reiterate the UN’s support for the International Humanitarian City.

Established in 2003 by Sheikh Mohammed bin Rashid, the IHC has grown to become the world’s largest and busiest logistics hub for humanitarian aid with UN agencies and other NGOs and commercial entities as members.

The IHC puts Dubai’s expertise in transport and logistics to work for aid agencies as they reach out to help the victims of crises and families whose lives are marred by hunger and poverty. The IHC’s capabilities and its strategic location, which puts it within seven hours by air for two-thirds of the world’s population, have helped deliver assistance during some of the worst humanitarian crises of the past decade, including the 2004 tsunami in Southeast Asia, the recurring drought in the Horn of Africa, civil unrest in Afghanistan and Darfur, and the 2010 earthquake in Haiti. Also, the IHC has been heavily engaged in the emergency response to Syria and the Philippines.

Shaima Al Zarooni, IHC CEO, in a statement after the launch, said the IHC has become the reliable international centre for humanitarian assistance in the Middle East and Africa, noting that the IHC has delivered humanitarian assistance over the past decade to the tune of more than Dh1 billion in total. She added that assistance is usually delivered within three to seven hours with Al Maktoum International Airport as the base.

She added that the IHC hosts representatives of more than 60 international humanitarian organisations.

According to her, the strategy consists of four main pillars:

Connect: Humanity aims to make the IHC a leading organiser, facilitator and host of annual regional and world humanitarian events. Programs will be set up to engage the Dubai and UAE society, and a world Humanitarian Forum will be held in the UAE in September every two years.

Innovate: Humanity will enable the IHC to contribute to the goals of the Dubai Smart City and Dubai 2021 plan.

Partner: Humanity will facilitate CSR partnerships by organising private sector events and launching the first International Humanitarian Impact Fund. This will strengthen the IHC’s role as a crucial connector and facilitator of humanitarian work in the private sector. This vision was greatly boosted by a generous donation of Dh1 million from Sheikh Mohammed bin Rashid, as a seed of encouragement that motivates the private sector to persevere in financing a steady stream of relief projects locally and internationally.

Sheikh Mohammed bin Rashid toured the photo gallery exhibition, which showcases the magnitude and life-changing impact of aid provided by the UN and other international humanitarian organisations based in the IHC, in response to numerous disasters worldwide. The total aid received exceeded Dh220 million in 2014.

He stated that the UAE, under the leadership of the President His Highness Sheikh Khalifa bin Zayed, will always remain a source of humanitarian goodness and charity,  being the legacy of the founding father, the late Sheikh Zayed bin Sultan  Al Nahyan. He said,” The IHC’s strategy is roadmap with definite features, goals, objectives and work mechanisms through 2021.”