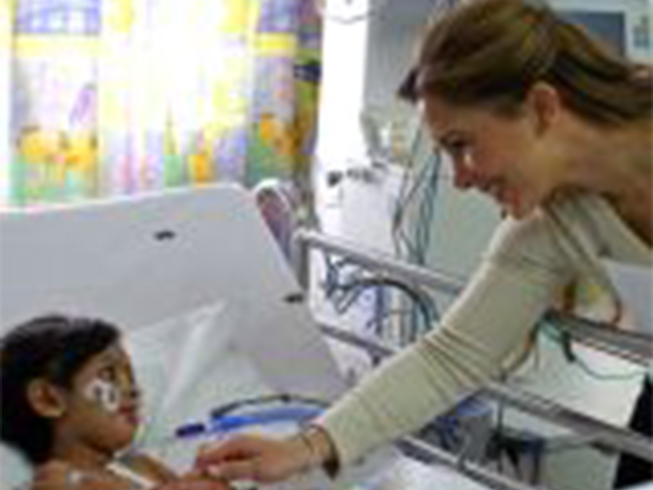 Operating out of the Netcare Sunninghill Hospital in Sandton, the WSPCCA is a charity organisation that facilitates life-saving heart surgery for underprivileged children from across Africa who suffer from congenital heart conditions.

According to Lynda Bleazard, CEO of the WSPCCA, the foundation is delighted with the news that Princess Haya has agreed to support the foundation, which was established as a living legacy to the late Walter Sisulu in 2004.

“Fewer than 20% of children in South Africa and less than 1% of children in the rest of Africa benefit from corrective cardiac surgery – even though 95% of all congenital heart defects are treatable,” Bleazard says.

“The procedures are expensive, around R140,000 (approx AED 62,500) per admitted case. As a result, we rely heavily on the generosity of private organisations and individual donors to pay for the various surgeries that our cardiothoracic surgeons perform on children from all over Africa.”

Princess Haya’s involvement with the WSPCCA began in April 2008, when She first visited the centre as part of a legacy tour with President Nelson Mandela to raise awareness of paediatric cardiac health in Africa.

“The legacy that my mother, Queen Alia, passed down to me was one of caring for the most vulnerable in society – in particular women and their children – and this is something that has been carried forward in my life and the projects that I become involved in,” says Princess Haya.

Princess Haya has played a critical role in establishing a number of initiatives across the Middle East to assist the region’s most vulnerable citizens.

Most notably, She established Tkiyet Um Ali, the first, non-governmental, food organisation in the Arab region, which provides humanitarian support to the people of Jordan and the region. Tkiyet Um Ali is at the forefront of providing food relief to Gaza.

“When I visited the WSPCCA last year, I was immediately touched by all the good work that the foundation does. Mr. Sisulu’s legacy is so closely aligned with my mother’s legacy of caring for women and children, and I saw an opportunity to help make a tangible difference in so many lives,” Princess Haya explains.

“The WSPCCA is an organisation that reflects the values and beliefs that I hold dear. In addition, Africa is a part of the world that I have visited often and have come to love.”

“As with addressing hunger, paediatric cardiac care is an area where a real and tangible difference can be made if the will to do so can be married together with resources and skill. And it is to this extent that I am proud to become officially involved with the WSPCCA,” Princess Haya says.

According to Dr. Robin Kinsley, head of cardiothoracic surgery at the Netcare Sunninghill Hospital and founder of the WSPCCA, with the Princess’s support there is sure to be an increase in the awareness of congenital heart disorders.

“The challenge we face in Africa is that many children are not diagnosed in time to intervene with surgery to repair a faulty heart. One of the foundation’s core values is driving education and skills development for medical professionals – doctors and nurses alike – and will be a major focus for us in the coming months.

“With the Princess’s involvement with the foundation, we are hopeful that an increased awareness of the disorders will lead to more research, investment and training in the field of paediatric cardiology across Africa,” Kinsley concludes.

The WSPCCA is an independent philanthropic foundation whose objectives include the provision of service delivery to underprivileged cardiac children, training and development and research. The centre is based within Netcare Sunninghill Hospital where it has the use of world-class facilities. For more information contact Lynda Bleazard, CEO of the WSPCCA on 011-257 2017.