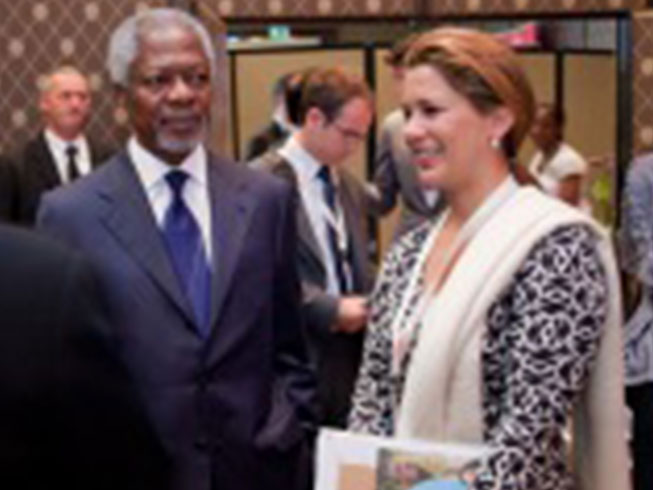 Among the concerned leaders and public figures who assembled at the humanitarian capital of Geneva this year were foreign ministers Dr. Bernard Kouchner (France) and Micheline Calmy-Ray (Switzerland); as well as senior members of the international and humanitarian communities, such as UNICEF Executive Director Ann Veneman, the WHO’s Executive Director Dr. Margaret Chan and Sir John Holmes Under-Secretary General for OCHA – together with heads of major environmental and climate authorities, such as the Nobel Laureate Dr Rajendra Pachauri (IPCC).

A founding member of the Forum, established by former UN Secretary-General Kofi Annan, Princess Haya joined a panel of experts which included Dame Barbara Stocking, Chief Executive, Oxfam GB; Malini Mehra, Founder and CEO, Centre for Social Markets; and M.S. Swaminathan, Chairman, M.S. Swaminathan Research Foundation as well as Ghana’s Minister for the Environment, to discuss the ongoing struggles poor women face and the need to reach out to women to influence policy and create gender-sensitive links to poverty. As part of the discussion, Princess Haya not only highlighted how climate change is affecting poor women but also emphasised the need to use women as agents for change through the existing routes established by UN agencies on other programmes.

“Women are at the heart of poverty and account for 70 percent of those most affected by climate change,” stated Princess Haya. “So there is no doubt that climate change is already hitting poor women harder than others. But many women in this situation are simply trying to survive, getting their voices heard on this issue at Copenhagen is important because although they are 70% of the most affected they can also be 70% of the solution, possibly more.”
One of the main reasons poor women are more vulnerable to the effects of climate change is that they are disproportionately dependent on threatened natural resources, no matter the geographical location. Women are responsible for food, fuel and water in most households in developing countries. When faced with climate issues of drought, erratic rainfall, flooding and deforestation, women must work harder to ensure safety and survival for their families who are dependent on their abilities.
Statistics show that the poorest women live in Asia and Africa, largely in rural areas that depend on agriculture. Eight out of 10 farmers in Africa are women and six out of 10 farmers in Asia are women.

The 2009 Forum attracted over 400 senior international participants, the largest international meeting ever held on the human impact of climate change. The 2009 Forum provided an independent and impartial international platform for debate. Deliberations focused on urgent and comprehensive measures that needed to be taken in order to deal with the already substantial human impact of climate change, and prepared the international community and worst affected countries for much greater impacts expected in the next 5-15 years. The outcomes of the discussions will be formulated into detailed recommendations when the Forum’s full report is made available in early Autumn.