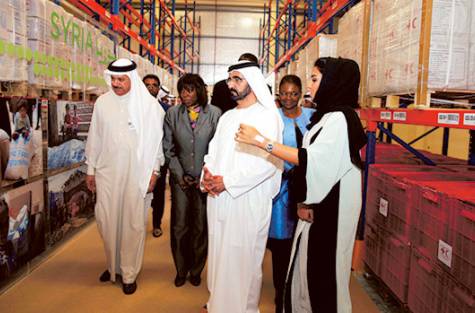 Dubai:International Humanitarian City (IHC) has a clear vision of the future on how best to serve those in need around the globe after the launch of a new strategy yesterday by top leaders.

Gathered to celebrate a new way forward, His Highness Shaikh Mohammad Bin Rashid Al Maktoum, Vice-President and Prime Minister of the UAE and Ruler of Dubai,launched the 2015-2021 strategy for the IHC.

The ceremony began with the national anthem, followed by a video showing a brief on the stages of the establishment of the city, which was founded on the order of Shaikh Mohammad in 2003, to become a leading global humanitarian logistics hub that connects East and West, in collaboration with the United Nations and international organisations concerned with humanitarian services.

Shaikh Mohammad toured the photo gallery exhibition, which showcases the magnitude and life-changing impact of aid provided by the UN and other international humanitarian organisations based in the IHC, in response to numerous disasters worldwide. The total aid received exceeded Dh220 million in 2014.

“The UAE, under the leadership of President His Highness Shaikh Khalifa Bin Zayed Al Nahyan,will always remain a source of humanitarian goodness and charity, being the legacy of the founding father, the late Shaikh Zayed Bin Sultan Al Nahyan. The IHC’s strategy is a roadmap with definite features, goals, objectives and work mechanisms through 2021,” Shaikh Mohammad said.

Shaikh Mohammad donated Dh1 million for the humanitarian city to motivate the private sector to persevere in financing a steady stream of relief projects locally and internationally.

Ban Ki-moon,Secretary-General of the United Nations, offered a recorded message expressing his sincere gratitude to Shaikh Khalifa and Shaikh Mohammad for their exceptional humanitarian accomplishments. He also praised the UAE for its prominent role and its commitment to work with the UN while providing vital logistical and financial support. He went on to reiterate the UN’s support for the International Humanitarian City.