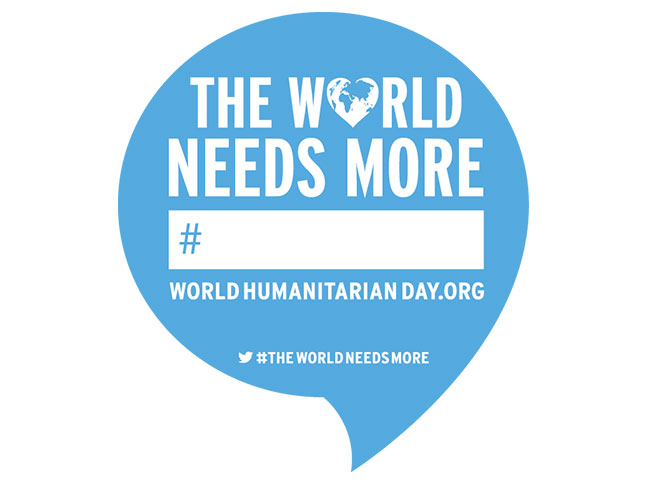 Dubai’s International Humanitarian City yesterday marked World Humanitarian Day (WHD) by celebrating humanitarian aid and honouring those whose who have lost their lives in humanitarian service. The event, which was organized by the IHC in collaboration with its UN and private partners, was held in the heart of Downtown Dubai, at the Dubai Mall from 10am-10pm.

This World Humanitarian Day also marked a decade since the United Nations headquarters in Baghdad was bombed, killing the then Special Representative of the Secretary-General to Iraq, Sergio Vieira de Mello, and 22 UN aid agency workers, as well as injuring scores of others.

This year, the United Nations and its humanitarian partners launched a global campaign called “The World Needs More…?”, with the aim of turning words and ideas into real aid for real people. The World Humanitarian Day event in Dubai encouraged participants to answer the question “What Does the World Need More Of?” via interactive touch-screens that enabled them to insert words of their choice based on what they think the world needs more of. At the close of the event, 11,000 individuals spanning 43 nationalities visited the stand, 5,000 of which participated, resulting in the most selected word being “Peace”.

Throughout the day, a short video featuring a message from UN Secretary-General Ban Ki-moon played, reminding passers-by and participants alike, of the importance of “teamwork”, of sticking together for peace, justice, dignity and development during the worst, most challenging of times. The video was followed by a special song for the WHD performed by Krister Linder.

“We are very proud to have the opportunity to organize the World Humanitarian Day event in Dubai for a second year in a row, and I would like to extend my appreciation to HH Sheikh Mohammed Bin Rashid Al Maktoum, Vice-President and Prime Minister of UAE and Ruler of Dubai for supporting the campaign, and to the Chairperson of IHC HRH Princess Haya Bint Al Hussein, wife of HH Sheikh Mohammed Bin Rashid Al Maktoum, for Her direction in executing this event at the highest level,” stated HE Major General Mohammed Ahmed Al Marri, IHC Board Member. “In our line of work, and in the midst of wars, natural disasters, and crises that stem from poverty, inequality and underdevelopment, it’s important to keep the humanitarian spirit very much alive. We were very pleased to witness such high-level participation at this year’s event and on behalf of the IHC, I would like to express appreciation to all who offered their support, in one form or another, to reveal what the world really needs more of”.

Home to over 44 NGOs and nine UN offices, the IHC continues to serve as a catalyst for raising awareness for humanitarian causes. Last year, the World Humanitarian Day’s global campaign reached over one billion people around the world through its ” I Was Here” campaign. This year, the campaign’s unique, ground-breaking theme revealed that the most powerful tools are, in fact, words.

Supporters who contributed to the event ranged from UAE government agencies to private sector companies. Through text messages, Etisalat reached over 2.5 million of their subscribers in the UAE, raising awareness of the campaign. A Dubai Media Incorporated sponsored the WHD television spots aired on its channels, which will run for the full month of the campaign. Meanwhile, Expo2020 promoted the campaign internationally, through their network of partners both regionally and globally. On the day of the event, Watani provided volunteers who helped with organizing as well as engaging the participants in the campaign, and Emaar and The Dubai Mall have generously provided the venue of the event. The IHC would like to extend its gratitude to its supporters who helped make the WHD event in Dubai a reality.