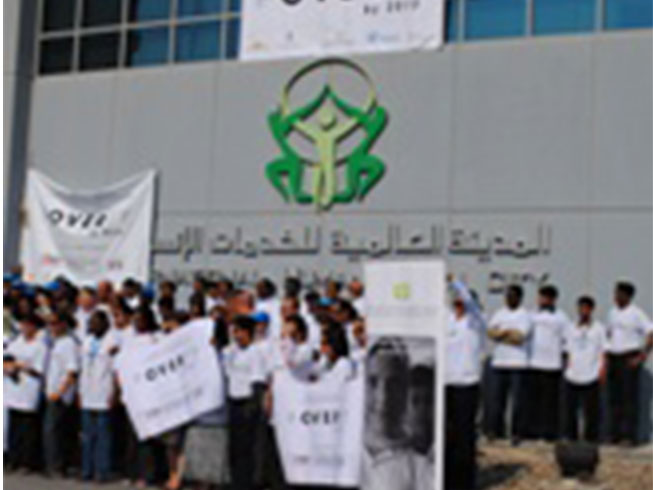 International Humanitarian City (IHC) today concluded a pledge ceremony for its members to voice their support for the Stand Up and Take Action (SUTA) campaign to eradicate extreme poverty and hunger from the world. The campaign is held under the patronage of UN Messenger of Peace and Chairperson of International Humanitarian City, Her Royal Highness Princess Haya Bint Al Hussein, Wife of His Highness Sheikh Mohammed Bin Rashid Al Maktoum, Vice-President and Prime Minister of UAE, Ruler of Dubai.

The ultimate goal of the campaign is to help improve the lives of 1.4 billion people currently living in extreme poverty around the world. HRH Princess Haya’s high-profile involvement underlines the strong support generated by the campaign from prominent personalities in both the public and private sectors in the UAE.

“The people of the UAE have been passionate supporters of the campaign for the past three years and it is encouraging to note that more and more individuals and organisations are realising the importance of this initiative,” commented Ms. Makiya Al Hajiri, CEO, IHC. “Over 140,000 people voiced their support during the different pledge ceremonies in the UAE last year, helping set a new record of 117 million participants worldwide. This year, we aim to reaffirm the UAE’s strong commitment to this noble campaign.”

Eliminating extreme poverty and hunger was one of the eight Millennium Development Goals (MDG) that 189 world leaders agreed to achieve (by 2015) during a meeting held at the UN Millennium Summit in 2000. The SUTA campaign was organised to remind global leaders of their commitments they made to meet the MDGs when they signed the Millennium Declaration in 2000.

Organised in the UAE by the International Association for Human Values and Art of Living, the Stand Up and Take Action campaign is supported by the IHC, the World Food Programme (WFP) and Red Crescent – Dubai. The campaign has generated strong support from thousands of individuals from different sectors across the UAE, including universities, corporate organisations as well as government and semi-government entities.

During the pledge ceremony, participants devoted two minutes of their time to stand up and pledge to take action in support of the cause against poverty and hunger. The campaign urged participants to ‘stand up” by voicing their support through the pledge ceremony, and to “take action” by implementing, participating and organising events related to the eradication of extreme poverty and hunger.

International Humanitarian City is an independent free zone authority created by the Dubai Government to provide local and international humanitarian groups and individuals with facilities and services specifically designed to meet their needs. IHC co-locates non-profit and commercial organisations to facilitate the sharing of best practices and consequently improve operational efficiencies and institutional learning. IHC highlights the UAE’s active pursuit of stronger regional and global partnerships in humanitarian services.