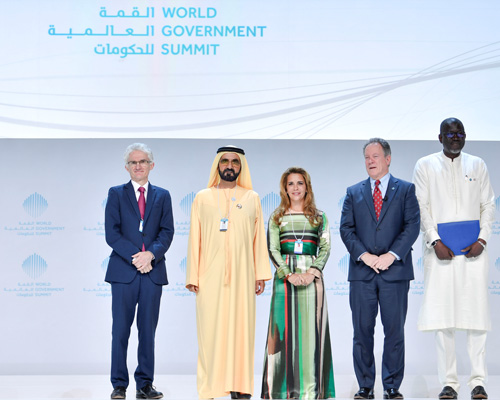 Sheikh Mohammed bin Rashid, who has been a key advocate and vocal supporter of the project since its inception, also attended the signing ceremony held on of “Letters of Intent” with a number of major international aid agencies, which is set to have a positive impact on the relief efforts and emergency responses.

The long-awaited solution is an information sharing platform dedicated to emergency preparedness and response. It facilitates the collection and sharing of data in real-time on prepositioned aid and humanitarian assets, helping to make emergency responses more timely and cost-efficient.

The new initiative comes at a time when political conflict, natural disasters, and climate change have created a level of demand for humanitarian aid not seen since World War II. Today around 136 million people across the world require humanitarian assistance and protection.

The Humanitarian Logistics Databank will address the long-standing issue which surrounds the coordination of aid shipments, which have taken a toll on relief efforts in some of the world’s most devastating crises.

The databank was designed by a team of specialists engineers, IT advisors and subject-matter experts at the IHC in Dubai, led by Giuseppe Saba, CEO of the IHC, and former Head of the United Nation’s Humanitarian Response Depots, UNHRD, with the support of operational humanitarian agencies, including the World Food Programme, World Health Organisation, UN Refugee Agency, the International Federation of Red Cross and Red Crescent Societies, UNICEF and the close cooperation of OCHA, the United Nations Office for the Coordination of Humanitarian Affairs.

The Humanitarian Logistics Databank will provide the global humanitarian community with a common database capable of processing up to date statistics on aid assets, locally, regionally and internationally. The technology was unveiled after an extensive piloting and building phase, culminating in a tried and tested solution that is expected to bring significant benefits to global relief missions.

Speaking at the launch in Dubai, Princess Haya bint Al Hussein said, “The lives of millions of people depend on the global humanitarian community and we believe that this much needed platform will dramatically help improve international aid and emergency response. The Humanitarian Logistics Databank will help build greater cooperation among aid providers and improve productivity and efficiency. This is a home-grown innovation that will serve people from all around the region and the world at times when they need it most.”

The Databank will employ automated tracking of aid movements based on customs data from ports, airports, and other entry points. It will provide the global humanitarian community with information on the exact positioning of critical relief items such as food, medicine and shelter, making them accessible to all cooperating parties. This platform will improve collaboration and will help avoid bottlenecks in ports and airports.

It will also help aid agencies identify where relief stocks are prepositioned in the UN and NGO humanitarian hubs worldwide and provide a clear picture of what is available in the various pipelines to address new and ongoing emergencies.

In its first phase, the Humanitarian Logistics Databank, will begin gathering data on aid shipments from Dubai in 2018. It will then be replicated in other humanitarian hubs across the world by January 2019.