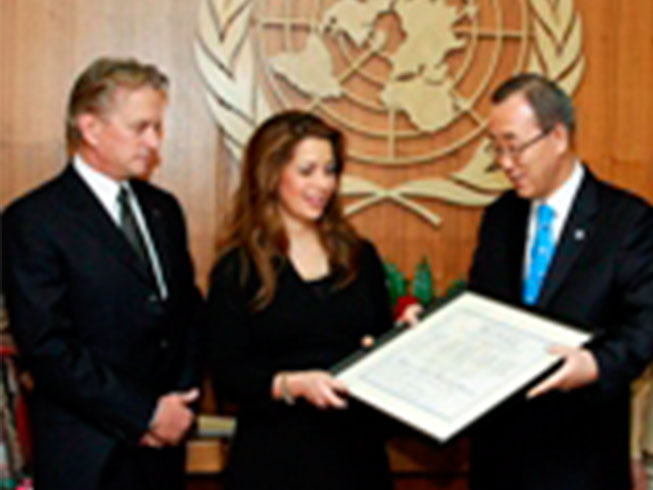 Since September 1981 and following a United Nation’s resolution, people from across the world have been celebrating the UN’s International Day of Peace. According to the resolution, the day works to serve as a reminder “that our permanent commitment, above all interests or differences of any kind, is to peace.” Every year on this day, millions gather to participate in all kinds of events, large and small, in order to highlight the need to end conflict and promote peace.

Alongside the celebrations, and specifically at the UN headquarters in New York, the UN Secretary General highlights the work of Messengers of Peace who are chosen for their commitment to humanitarian causes. The role of the Messenger of Peace is to raise worldwide awareness of the values and activities of the UN.

Known for Her commitment to positive change in the humanitarian landscape, on the 21st September, 2007, HRH Princess Haya Bint Al Hussein, wife of HH Sheikh Mohammed Bin Rashid Al Maktoum, Vice-President and Prime Minister of UAE and Ruler of Dubai, was named a UN Messenger of Peace by Secretary-General Ban Ki-moon.

According to Princess Haya, “Peace Day is an occasion to remember the vitally important work of the United Nations, its humanitarian agencies, organizations and individuals in creating a more peaceful, just and sustainable world.” She urged people of all backgrounds to use the International Day of Peace to focus on what they, as individuals could do, stating “We must all do our part to create a long-term culture of peace”.

HRH Princess Haya, as Chairperson of International Humanitarian City (IHC), the global humanitarian hub created by the Government of Dubai under the Directives of HH Sheikh Mohammed Bin Rashid Al Maktoum, highlighted that the UAE is but one of many communities and nations worldwide that are observing the occasion this year.

Ms. Makiya Al Hajiri, CEO of International Humanitarian City, also supports the occasion. “Efforts like “Peace Day” have a global impact in bringing attention to critical issues, and we must all try to incorporate the day’s meaning into our lives not just today but all year round.”

Peacebuilding activities on the occasion range in scale from personal acts of kindness toward others to global inter-governmental programs. This year the UN has created a campaign to create awareness of the need for reducing weapons of mass destruction as well as nuclear disarmament and non-proliferation. Based on last year’s reports, it is estimated that there will be over 10,000 events on the planet this year, sponsored by thousands of organizations, and that over 200 million people will participate.

For ideas on how to get involved in the International Day of Peace and for more information see the UN’s website at www.internationaldayofpeace.org

ABOUT PRINCESS HAYA:
Her Royal Highness Princess Haya Bint Al Hussein is the daughter of King Hussein Bin Talal of Jordan (1935-1999) and Queen Alia Al Hussein (1948-1977). Princess Haya’s work and interests focus on humanitarian issues and human development concentrated primarily on the areas of health, education, youth and sports. In Her capacity as a UN Messenger of Peace, She works on raising awareness of the Millennium Development Goals (MDGs), especially those of eliminating poverty and hunger. Princess Haya founded Tkiyet Um Ali, the first Arab NGO dedicated to overcoming hunger, in Her native Jordan and now chairs Dubai’s International Humanitarian City. She is a founding member of former Secretary-General Kofi Annan’s Global Humanitarian Forum based in Geneva and was the first Arab woman to serve as an ambassador for the World Food Programme. In the course of Her duties the Princess works closely with a number of regional and global organizations, aid foundations and UN agencies.