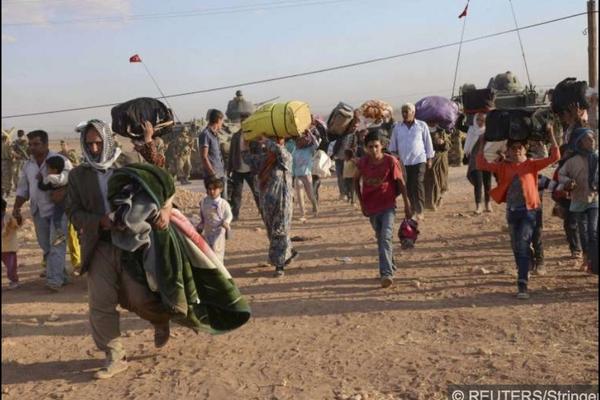 A convoy from the United Nations World Food Programme (WFP) and the UN Refugee Agency (UNHCR) loaded with food and humanitarian supplies arrived Saturday in western Libya to help thousands of families displaced from the recent fighting near Tripoli. “Although the security situation in Libya is volatile and perilous, WFP has managed to resume food assistance operations in the country. We are assessing the situation on the ground and our assistance will be increased in line with people’s needs,” said Mohamed Diab, WFP Regional Director for the Middle East, North Africa, Central Asia and East Europe.The seven-truck aid convoy to Zintan, Gharyan and Tarhuna will assist 6,700 people for at least one month. The trucks carried more than 1,300 food rations and hygiene kits. Each ration feeds a family of five people for one month and comprises items such as wheat flour, pasta and tomato paste.The rapidly deteriorating security situation in Libya continues to cause new waves of displacement, particularly in the western outskirts of Tripoli and in the eastern city of Benghazi. The renewed fighting is deepening the humanitarian needs of internally displaced and communities affected by the fighting that started more than seven weeks ago. The price of food and basic items such as cooking fuel and wheat flour, have doubled.Most displaced people are living in schools and host communities under growing strain from the influx. Access is difficult, with blocked roads preventing the delivery of food and medical supplies to areas most affected by conflict.“It is extremely challenging to reach out to affected communities in order to deliver much- needed assistance, while clashes and fighting are ongoing. Their needs are growing by the day and we need to be able to respond on time. Today, much more support is needed but it requires our ability to get into the affected areas,” said Saado Quol, UNHCR’s Acting Chief of Mission in Libya.The UN Support Mission in Libya (UNSMIL) and local crisis committees put the total number of people internally displaced in Libya at more than 140,000 and assessing their needs poses huge challenges.This is the second time UNHCR, working together with partners Taher Al-Zawi and IMC, has sent cross-border humanitarian aid to IDPs fleeing fighting in Tripoli, The previous one, on 18 August, reached some 12,000 displaced people in Zawiya, west of Tripoli. Working with local partners to deliver on-the-ground assistance, UNHCR plans to reach 85,000 people in need of protection and assistance by end of this year.WFP provided food to people in Libya hit by the 2011 conflict, but phased out assistance when the situation in the country stabilised. In the current context, WFP plans to cover the food needs of 50,000 people in the country until the end of the year.