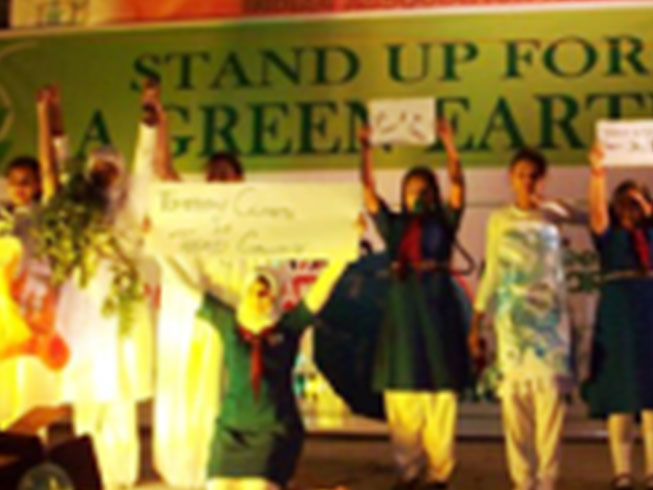 On October 17, 18 and 19, 2008 over 140,000 people in the UAE and over 117 million people (2% of the world population) around the world Stood Up to Take Action as a part of the international United Nations campaign to remind their leaders of their promises for a better world for tomorrow, articulated through the UN Millennium Development Goals of 2015.

UAE has chosen Millennium Development Goal No. 7 – sustainable environment – as its focus for the 2008 campaign. On the designated dates of October 17th, 18th and 19th, men, women and children across the country Stood Up and took responsibility for their environment by adopting and committing to adopt sustainable practices in their personal and community lives. Like last year, the Mission Green Earth- Stand up and Take Action 2008 campaign is being held under the Royal Patronage of UN Messenger of Peace HRH Princess Haya Bint Al Hussein, Wife of HH Sheikh Mohammed Bin Rashid Al Maktoum, Vice President and Prime Minister of UAE and Ruler of Dubai. It has the support of UNDP, UNEP and the International Humanitarian City and is organized by Art of Living and the International Association for Human Values with the support of Barclays Bank PLC.

> VIDEO: Click here to watch Princess Haya addressing UAE in a very powerful, heartfelt speech on the importance of Mission Green Earth, followed by glimpses of some of the many people who made the gesture of Standing Up across the UAE.

As a continuation of this campaign, the Ras Al Khaimah (RAK) cooperative Society, with support of the Indian association and four schools, were part of a Mission Green Earth – Take Action event on Thursday, 13th November 2008 at the Indian Association Hall, Ras Al Khaimah .

The event was a big success, with a strong show of energy, enthusiasm and commitment from the organizers as well as participants.

The Chief Guest Mr. Mohammad Al Shamsi, Chairman of RAK Co-op and other Board members of the Indian Association stayed on for a colorful and entertaining program by the talented school children. The evening ended with Ghaf seed planting by school principals and guests.

It is encouraging to see schools and social groups and organisations continuing to participate as role models and instruments of changes for a better tomorrow and continuing to inspire everyone through sustainable living practices that can be applied simply in everyday life.

Photograph: School children and Supporters of Mission Green Earth at the RAK event

This year’s campaign aims to mobilise and engage UAE residents, collectively and individually, in support of environmental sustainability and sustainable living through two challenges.

To participate and learn more about MISSION GREEN EARTH, go to www.missiongreenearth.org.