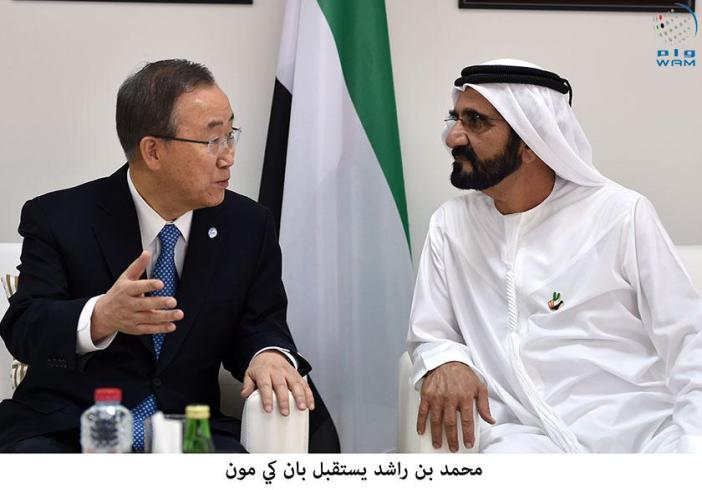 Vice President and Prime Minister and Ruler of Dubai, His Highness Sheikh Mohammed bin Rashid Al Maktoum, today received UN Secretary-General Ban Ki-moon, who is attending a ceremony marking the launch of a report on High-level Panel on Humanitarian Financing in Dubai.

Sheikh Mohammed and the UN Secretary-General exchanged views on a number of issues related to humanitarian assistance, especially the state of refugees across the world who are in need of special humanitarian aid to sustain them and provide certain minimum necessities of life in the light of the dire conditions facing them, such as cold weather, hunger and homelessness.

Ban Ki-moon hailed the UAE’s humanitarian assistance provided to the needy people in the light of the constructive cooperation of Emirati competent authorities with the UN organisations, entities and programmes.

He also pointed out the role played by the International Humanitarian City, based in Jebel Ali, Dubai and chaired by HRH Princess Haya bint Al Hussein, wife of Vice President and Prime Minister and Ruler of Dubai, His Highness Sheikh Mohammed bin Rashid Al Maktoum.

Among those who attended the meeting were Princess Haya bint Al Hussein, Reem bint Ibrahim Al Hashemi, Minister of State, Mohammed Ibrahim AI Shaibani, Director-General of His Highness the Ruler’s Court, Government of Dubai, Ambassador Lana Nusseibeh, the Permanent Representative of the UAE to the United Nations, Khalifa Saeed Suleiman, Director-General of the Department of Protocol and Hospitality in Dubai.