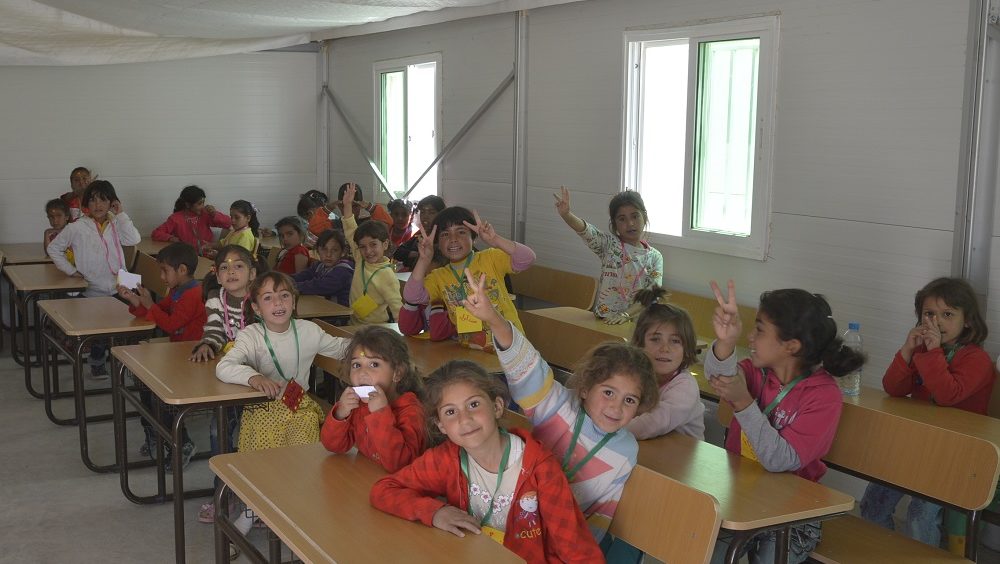 The Norwegian Refugee Council (NRC) in partnership with UNICEF has began providing the first learning opportunities to vulnerable Syrian refugee children through its Education Programme, launched this week, in the Azraq refugee camp in northern Jordan.
The UNICEF-supported school under the jurisdiction of the Ministry of Education (MoE) is not set to open until the start of the next school year in September, but with Azraq camp already a month old and now with more than 5,772 people calling it their temporary home, there is a vital need to support children in the camp.
NRC registered more than 290 children in the first week and will temporarily use the site of the MoE school until our own sites are finished in the camp in the summer.
The NRC-UNICEF programme will ensure that refugee children impacted by the now more than three years of conflict in Syria do no fall further behind and critically gives a sense of normalcy to children in an isolated refugee camp.
NRC and UNICEF are the first humanitarian partners to begin providing Syrian refugee children in the camp with the chance to continue their education.
These “catch-up” classes in Arabic, English, Math and Science are based on the Jordanian curriculum and taught by Jordanian teachers. NRC is also providing children with recreational and sports activities.
NRC-UNICEF programme has already supported more than 2,600 children with similar learning opportunities in Zaatari and EJC camps.
“NRC is working with UNICEF and the Education Ministry to develop pathways back to formal education for children who have been out of the system for long periods of time,” NRC Jordan Country Director Robert Beer said in a statement.
“We want to see Syrian refugee children and youth access quality education and learning opportunities that prepare them for the future,” Beer added.
”Children who have missed a year or more of school may struggle to re-enter formal schooling because they cannot catch up or are put in grades below their age,” NRC Education Project Manager Camilla Lodi noted. “In Zaatari, for example, a quarter of all children are estimated to have missed more than one year of schooling”.
The NRC-UNICEF education programme is supported by The Norwegian Ministry of Foreign Affairs, the European Union (EU), the Government of Germany through KFW, Italy, The US Government through PRM, and the state of Kuwait.
NRC is now replicating many of the essential functions it provided in Zaatari Refugee Camp in Azraq. This includes managing the reception area for newly arriving refugees and the provision of basic relief items, the construction of Shelters  in the camp along with running of centres for children and youth in the camp.