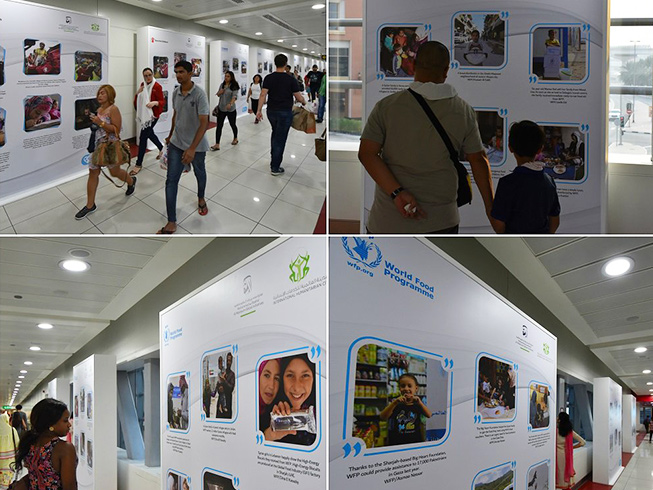 Under the patronage of the Chairperson of the International Humanitarian City, Her Royal Highness Princess Haya Bint Al Hussein, wife of Vice-President and Prime Minister and Ruler of Dubai, His Highness Sheikh Mohammed bin Rashid Al Maktoum, the International Humanitarian City (IHC) organised yesterday, the 19th of August 2017, a photo exhibition celebrating World Humanitarian Day (WHD) to raise awareness of ongoing emergencies worldwide. The exhibition was held at Mall of the Emirates metro station with the participation of UN agencies, international humanitarian groups, and prominent UAE humanitarian and charity organisations. It took place in coordination with the Roads and Transport Authority which provided all necessary support for the event success.

The exhibition, which was held at the covered tube that connects Mall of the Emirates metro station with the Mall, displayed more than 150 photos, and underscored several messages to the visitors of the mall and the passengers of the metro. The photos projected the suffering of the populations in the countries most affected by famine, epidemics, natural disasters and political conflict.

The IHC and its humanitarian members from the international community also displayed photos that reflected their activities designed to alleviate suffering in these countries in addition to several banners that projected key statistics about the deteriorating humanitarian situation in several countries.

“We must seize this occasion to shed light on the disastrous humanitarian crises that do not get enough attention in the media and from donors today,” Princess Haya said. ” More than 20 million people in East Africa and Yemen now face famine – the largest number in more than a half century, they all desperately need our help and more assistance soon,” added Her Royal Highness.

The theme of the WHD this year focuses on protection of civilians and aid workers. This protection campaign was initiated by Médecins Sans Frontières (MSF) after the hospital bombing this year in Kunduz, Afghanistan. A hashtag #NotATarget was launched by MSF to commence an online campaign, with social media activities and influencer engagement. Other humanitarian organisations have been using also the hashtag, notably UNICEF and ICRC, which has helped build significant public awareness.

World Humanitarian Day (WHD) is held each year on August 19 and commemorates the deaths of 22 people during a bombing of the United Nations headquarters in Baghdad, Iraq, in 2003. Since that day, it has been held to pay tribute to aid workers who risk their lives in humanitarian service, and to mobilize people to advocate for a more humane world.