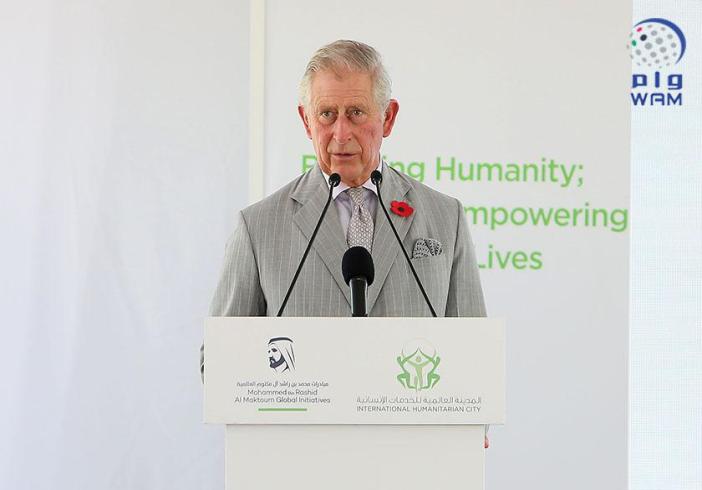 HRH Prince Charles, the Prince of Wales, today praised the United Arab Emirates for its generosity in terms of humanitarian assistance, describing this as one of the facets of the ‘remarkable legacy’ of the country’s founding father, the late Sheikh Zayed.

The Prince and his wife, HRH the Duchess of Cornwall, were visiting International Humanitarian City, IHC, on the third day of their visit to the UAE.

In a major speech during his visit, Prince Charles referred to the rising need for humanitarian aid globally and to what he described as the UAE’s “long track record in helping those who are affected by natural disasters,” as well as the close collaboration between the UAE and the United Kingdom on development aid and assistance.

That, he said, ” has become an important element of our close and warm bilateral relationship.”

The full text of the speech follows: “Your Royal Highnesses, Your Excellencies, Ladies and Gentlemen, it is a very great pleasure to be here today at the International Humanitarian City, an enduring and tangible testament to the compassion of Sheikh Mohammed bin Rashid and Princess Haya, who have followed the teaching of The Quran to: ‘do good, for indeed God loves the beneficent’.

The United Arab Emirates, and the broad spectrum of support that they offer, could not be more needed in these complicated times. It is, of course, merely a part of their long track record in helping those who are affected by natural disasters, not to mention the sixty five million who are displaced by conflict. Indeed, according to the OECD, having in 2014 disbursed 1.26 percent of its Gross National Income as development assistance, the UAE are literally second to none in their generosity.

If I may say so, ladies and gentlemen, I see this as but one facet of Sheikh Zayed’s remarkable legacy.

Given this, you will, I am sure, realise the laudable ambition embedded in IHC’s 2015-2021 Strategy of becoming the world’s foremost humanitarian logistical hub. I know that all of the organisations here are profoundly grateful for your support, not least UNHCR, the World Food Programme and the Red Crescent and the Red Cross (whose British President I happen to be).

I am delighted that the collaboration between the United Kingdom and the UAE on a range of development and assistance policies, from water and sanitation to humanitarian cooperation, has become an important element of our close and warm bilateral relationship. Our Secretary of State for International Development was here only two weeks ago to meet H.H. Sheikh Abdullah bin Zayed al Nahyan, to discuss how our relationship in this area can be further developed.

And yet, when in 2003 Sheikh Mohammed helped the World Food Programme expand the system of United Nations Humanitarian Response Depots and then inaugurated this Humanitarian City in 2007, I wonder if even he had quite anticipated the scale of the challenges with which we were going to be faced a mere nine years later? For, while its location enables the City to be effective in South East Asia, the Horn of Africa and even (and again, sadly so recently) Haiti, it is also a poignant fact that so much of your aid is for far closer to home.

For too many decades, we seem to view disasters through either a development or a humanitarian lens, while also dividing those caused by human intervention from those derived from natural causes or environmental degradation. These distinctions are probably less valid now that we are dealing with the undermining of the planet’s natural capital by the unsustainable use of water, pollution of the atmosphere, soil degradation, accelerated extinction of biodiversity, destruction of the world’s remaining tropical forests on which we depend so much for our survival, and, it now transpires, desecration of the world’s oceans.

And, of course, that greatest risk multiplier of all, Climate Change, is rapidly exacerbating the range and impact of the suffering, so that the political and economic insecurity that blights so many lives is all too frequently either catalysed or augmented by drought, flood or storm and the almost inevitable hunger that results. We are, it seems, Ladies and Gentlemen, absolutely determined to test the planet’s ecosystems, to destruction. Not, one would have thought, a particularly wise move…

The impacts of all this, in terms of meeting the daily needs of millions of people, either within their home environment or after they have been displaced, are now unprecedented and are known to all of you far too well. We are now, it seems, breaching the world’s environmental planetary boundaries at a truly alarming rate. This, unsurprisingly, has increasingly dire consequences and, as always, they fall first and hardest on those who are the most vulnerable and live in the most fragile environments.

And so what are we to do? Responding quickly and effectively to disasters in a way that this city so admirably does is obviously key, but so is anticipation and a strategic approach that builds alliances in advance rather than the tactical patchwork that can perhaps too often characterise our reaction. I wonder how sustainable it is to view humanitarian and development assistance as rival endeavours, albeit as a response to the same moral imperative. We need to pull together collectively and this means identifying all types of support, including public, private and philanthropic capital drawn from traditional, including Islamic, sources and used in innovative ways to build resilience throughout society and across ecosystems and landscapes…

Given this, one can only but welcome the Grand Bargain announced at the UN Humanitarian Summit in Turkey this year, with its focus on increasing the efficiency of Aid financing; the urgent need for the humanitarian sector to respond adequately to conflict; and the attention given to education.

Here I would just like to note, in particular, the Education Cannot Wait Fund, which is being supported both by Dubai and the UK At a time when thirty nine million children of conflict are out of school, the importance of ensuring that the long term stability and prosperity of the countries from which refugees have fled are not jeopardized by a generation raised without education cannot be overstated. We owe it to ourselves to do this, but also to our children for, as Tony Lake, the Executive Director of UNICEF, said ‘In the midst of violence and instability, school is a place of learning and opportunity, a haven of normalcy and hope for the future’.

So Ladies and gentlemen, if that future is to be secure and sustainable one then it surely incumbent upon all of us to take the longer view to see the connection between the challenges before us and to act accordingly while we still can, in order to tackle the root cause of accelerating climate change by rapidly de-carbonising our entire economy. I’m afraid that at the end of the day nothing else will suffice.

In the meantime, may I offer my warmest possible congratulations to all those remarkable people here in this city who so much to help others and particular all those who aren’t here but are working in incredibly dangerous circumstances in other parts of the world where they are faced by such immense difficulties. They are truly remarkable.

Thank you ladies and gentlemen.”