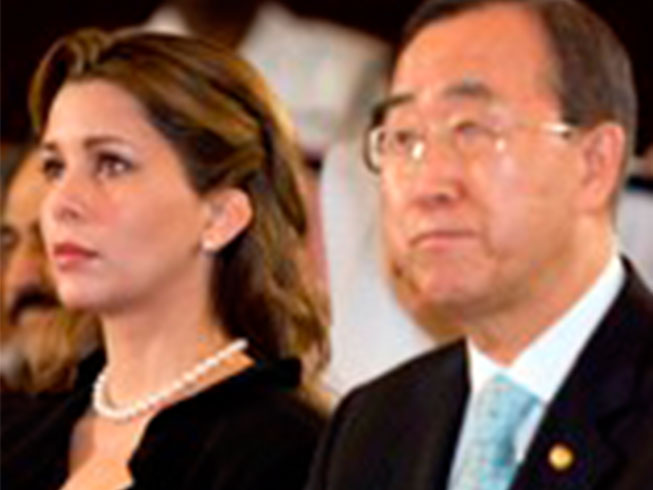 Speaking at the launch of the 2009 Global Assessment Report on Disaster Risk Reduction in Bahrain today, HRH Princess Haya Bint Al Hussein, wife of HH Sheikh Mohammed Bin Rashid Al Maktoum, Vice-President and Prime Minister of the UAE and Ruler of Dubai, emphasized the need to alleviate human suffering and ensure that those affected by disaster are not only treated but treated humanely.

Hosted by the Prime Minister of Bahrain, Khalifah ibn Sulman Al-Khalifah, the Report is the first biennial global assessment of disaster risk reduction prepared in the context of the International Strategy for Disaster Reduction (ISDR). It identifies hard-hitting evidence to demonstrate how, where and why disaster risk is increasing globally and presents 20 actions to reduce such risks, which will have beneficial effects on broader global security, stability and sustainability.

In line with Dubai’s role as a major transport and logistics hub to assist aid agencies working to alleviate disasters, Princess Haya added “In terms of practical assistance, I would like to call for a global structural assessment of all schools and hospitals, the first 50% to be completed by the end of 2010 and the remainder by the end of 2011. As recently witnessed in Italy, doctors were forced to operate in the open air and schools, a natural shelter in times of trouble, were rendered unusable.”

‘Disaster risk is rising in an alarming way, threatening development gains, economic stability and global security while creating disproportionate impacts on developing countries and poor rural and urban areas,’ said UN Secretary-General. ‘While we cannot prevent natural phenomena such as earthquakes and cyclones, we can limit their consequences. Pre-emptive risk reduction is the key. Sound response mechanisms after the event, however effective, are never enough.’

The report offers a global risk analysis on emerging and predictable disasters effecting humanity such as climate change risks. Eventually, by identifying these risks and by investing in disaster risk reduction poverty and death rates will be reduced. The report will also present a comprehensive review of progress by countries in implementing disaster risk reduction measures, within the context of achieving sustainable development goals.

ISDR was launched in 2000 to provide a framework to coordinate actions to address disaster risks at the local, national, regional and international levels. The Hyogo Framework for Action 2005-2015 (HFA), endorsed by 168 UN member states at the World Conference on Disaster Reduction in Kobe, Japan in 2005, urges all countries to make major efforts to reduce their disaster risk by 2015.

The 2009 Global Assessment Report on Disaster Risk Reduction will aim to focus global media and political attention on the problem of disaster risk and to strengthen countries” commitment to reduce the loss of life, livelihoods and economic assets through natural disasters.