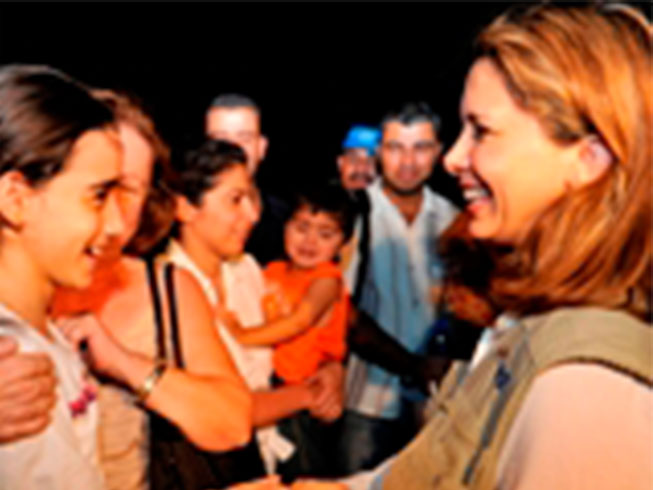 UN Messenger of Peace and Chairperson of International Humanitarian City (IHC) HRH Princess Haya Bint Al Hussein, wife of HH Sheikh Mohammed Bin Rashid Al Maktoum, Vice-President and Prime Minister of the UAE, Ruler of Dubai, arrived in Amman, Jordan yesterday from Port-au-Prince with 21 evacuees from around the Middle East who had been left stranded after the devastating earthquake that shook Haiti on January 12. The evacuees, some carrying small children, applauded as Princess Haya welcomed them on the plane, then crowded to hug Her and shake Her hand.

In a display of international solidarity for Haiti, Princess Haya, on a 747B-400 personally owned by HH Sheikh Mohammed, traveled to Haiti to oversee a delivery of 90 metric tonnes of relief supplies for the Haitians, meet with Haitian and UN officials and raise awareness of the need for international aid.

“Dubai may be far away, but we join in reaching out to Haitian families who have lost so much and are struggling now just to survive. The sad truth is that Haiti has long been neglected and this earthquake is a collective wakeup call for the international community. Yes, we need to deliver food, medicines and water today — fast. But we must stay committed to Haitians as they rebuild. After decades of failed aid, Haiti is the poorest and hungriest place in the Americas. We cannot let that stand,” said Princess Haya.

The shipment was organized by the International Humanitarian City, a global humanitarian and aid hub in Dubai, at the request of the UN World Food Programme (WFP) and included 40 metric tonnes of canned food and high-energy biscuits, and another 50 metric tonnes of hospital tents, water sanitation equipment, prefabricated offices, and computer and telecommunications equipment.

In addition to WFP’s cargo, the 747B-400 carried emergency supplies from the UN Refugee Agency (UNHCR), the World Health Organisation (WHO), UNICEF and the Mohammed Bin Rashid Al Maktoum Humanitarian and Charity Establishment. Workers from the establishment, an initiative launched by HH Sheikh Mohammed in 1997 with an aim to provide relief to disaster stricken areas and to promote charity and humanitarian work for those living in the region, remained in Haiti to assist with food distribution.

WFP has the lead for the United Nations on communications and is seeking to re-establish networks disrupted during the earthquake as the aid effort expands in the coming weeks.