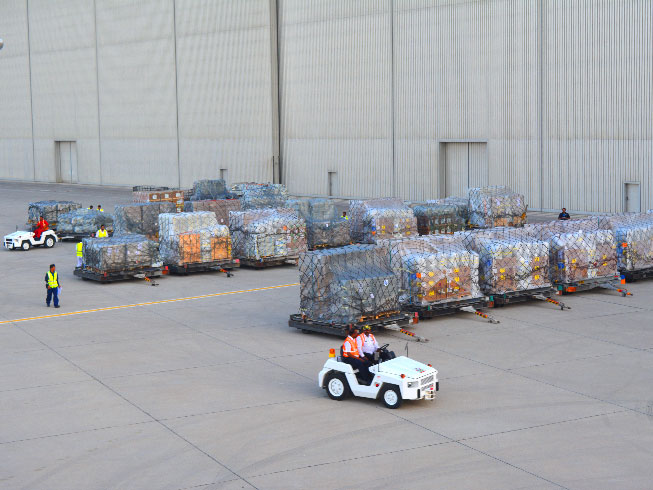 Under the direction of Vice President, Prime Minister and Ruler of Dubai, His Highness Sheikh Mohammed bin Rashid Al Maktoum, around 100 tonnes of relief and survival items, organised by Dubai’s International Humanitarian City, IHC, has departed from Dubai International Airport to Madagascar to assist with recovery efforts following Cyclone Enawo, the strongest to strike the island nation in 13 years.

The cyclone, which has left towns and cities flooded; houses, schools, hospitals and critical infrastructure destroyed; and to date, over 65,000 people displaced, is expected to eventually affect 760,000 people in nine regions across Madagascar.

Upon hearing about the cyclone, members of the International Humanitarian City requested support from IHC’s management who, in turn, worked with the IHC board in coordination with His Highness Sheikh Mohammed, to ensure that an aircraft was made available. This aircraft was a personal contribution from H.H. Sheikh Mohammed, once again, to support the IHC and its members and for the people of Madagascar.

This is the International Humanitarian City’s first response to a natural disaster on the African continent. Previously, the IHC had facilitated aid for war and refugee problems in Africa, mostly protracted emergencies, but never a natural disaster.

Tropical Cyclone Enawo struck northeastern Madagascar on the morning of 7th March, travelling at two to three hundred kilometers per hour. On 8th March, Enawo weakened from an intense to a moderate tropical storm, with an average speed of 80km/hour with peaks of 112km/hour.

Many whose homes have been flooded or destroyed are staying with relatives in more secure areas, while thousands of IDPs are sheltering in schools, churches and gymnasiums. Heavy winds, floods and landslides have wounded 183 people and killed 50 so far, with 20 people missing. The extent of the damage is as yet unknown due to poor communication and difficulty reaching affected areas.

Relief items are pre-positioned in 15 districts to respond to food security, education, health, nutrition, shelter, water, sanitation and protection needs. But more aid must be transported to hard-to-access areas in the northeast by sea or air. Additional supplies started to be deployed to Sava and Analanjirofo regions on 10th March.

Humanitarian clusters are meeting daily and a joint operations center has been established at the National Office for Disaster Risk and Management headquarters in Antananarivo.