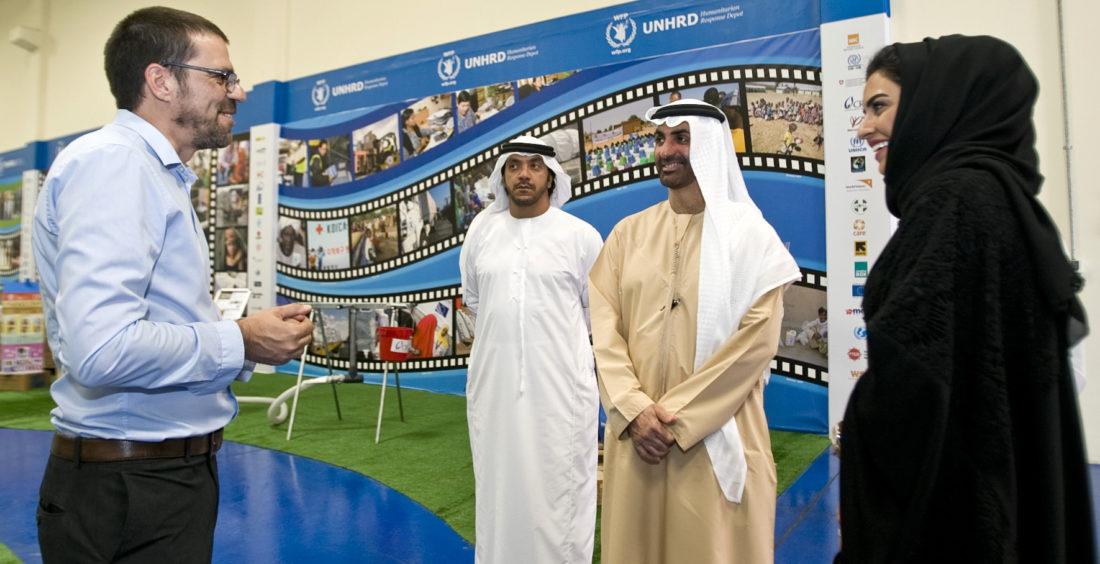 The International Humanitarian City (IHC) welcomed Sheikh Abdul Aziz Bin Ali Al Nuaimi, Secretary General of Al Ihsan Charity Association to its premises on Wednesday, where he toured the IHC facilities and presented the IHC community with an inspirational talk.
Sheikh Abdul Aziz Al Nuaimi, also known as the “The Green Sheikh” for his environmental and charitable advocacy started the visit with a comprehensive tour of the IHC warehouses, where the UN organizations including the UN Refugee Agency, the World Food Programme and the UN Humanitarian Response Depot store the largest global stockpile of aid. The Green Sheikh was also accompanied by the IHC team including CEO Shaima Al Zarooni to the warehouses of Emirates Red Crescent and the International Federation of the Red Cross and Red Crescent Societies, where shipments of medical and emergency relief items are shipped weekly to aid Syrian refugees and victims of conflict across the central African region.

Following the tour, members of the press and the IHC community including UN staff as well as international humanitarian organizations and commercial members’ directors and employees welcomed The Green Sheikh and were audience to his hour-long lecture, “The Power of Altruism; the Highest Degree of Nobility”.
The motivational session revolved around the concept of humanity and the sense of giving back, as well different perceptions of charity within society, and present-day practices including voluntarism and community service. The Green Sheikh also talked about the importance of investing in the environment, and the significant impact of reducing carbon footprints. The audience later engaged in a Q&A session which enabled them interaction with The Green Sheikh.

“We are honoured by the presence of Sheikh Abdul Aziz Al Nuaimi who is an inspiration to all of us, especially to the youth of our society,” said HE Shaima Al Zarooni. “This is a wonderful opportunity for us to come together and introduce the international humanitarian community to the spirit of humanity here in the UAE,” she added.