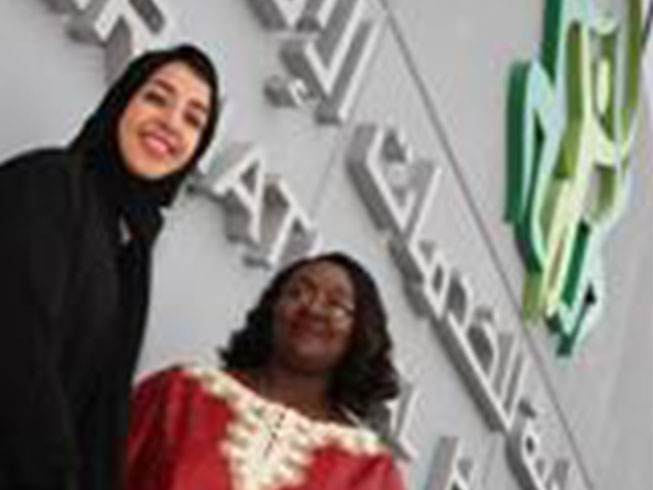 Part of a two day visit to Dubai, at the invitation of Dubai-based charity “All As One”, the humanitarian gathering at IHC coincides with the celebration of the “International Day of the African Child”. Initiated seventeen years ago by the Organization of African Unity this day honours the memory of the children who, in 1976, were brutally shot down while marching in the streets of Soweto (Southern Africa) to protest the inferior quality of their education.

The First Lady of Sierra Leone dedicated her visit to promoting education, identity, welfare, status and other civil rights for children and their families in Africa. “The war in Sierra Leone has left some very difficult legacies and a great number of orphans is one of them”, said Mrs. Sia Koroma, adding “the children are in need of food, housing, education, medical support. Humanitarian workers are making arduous efforts to improve their situation and give them hope”, continued Mrs. Sia Koroma.

She highlighted the contributions made by “All As One” (AAO), an international charity registered with IHC, which provides complete care for the orphans and destitute children of its Freetown Center. “It was wonderful to see the children looking so happy and well cared for. The centre provides them with education and the opportunity to be children”, concluded Mrs. Sia Koroma. The 5th CSR Summit Gala Ball event, held yesterday in Dubai and featuring Mrs. Sia Koroma as honoured guest speaker, showed full support and helped raise funds for the center. “I’m pleased the Summit supported a Sierra Leonean NGO, “All As One” which is committed to the cause of the children in our country”.

Mrs. Sia Koroma was especially moved by AAO’s “Children Caring for Children” programme initiated at Horizon School in Dubai which encourages generosity, humanitarianism and involvement in children, while also fostering new friendships and learning about each other’s culture. She welcomed also the Four Dirhams-A-Day sponsorship programme created by AAO, which enables people to become vital sponsors of a child, through a contribution of just 120 dirhams a month for a year.

“We are honoured by Mrs. Sia Koroma’s visit”, commented Her Royal Highness Princess Haya Bint Al Hussein, Chairperson, IHC, “Her long standing dedication in the humanitarian work, in raising awareness for the cause of the African children, and funds for the betterment of their lives, represent the core work in serving humanity at large”, concluded Princess Haya, who has lent her name to serve as a UN Messenger of Peace, an appointment she received in recognition of her own efforts to improve the lives of the less fortunate. Throughout her work Princess Haya places much emphasis on supporting the children of Africa by advocating for their rights to medical care, education and food. Princess Haya has recently visited medical and food relief centers in South Africa at the invitation of President Nelson Mandela and is one of the main supporters of the Walter Sisulu Pediatric Cardiology Center for Africa which renders crucial surgical support to African children a well as training and qualification of African doctors and heart surgeons.

During the visit, Mrs. Sia Koroma is taking a tour of the premises and getting briefed by senior representatives at IHC on its humanitarian operations, vision, and future expansion and relocation plans. Present during her visit were the country representatives of all the United Nations entities established in the UAE including UNDP, UNICEF, WFP, UNHCR, OCHA, IRIN, UNDSS and UNU-INWEH, as well as non-governmental organisations operating in Sierra Leone or which have been supporting All As One’s activities over the years, like World Vision, Make a Wish Foundation, Life for Relief & Development and Gulf for Good.

A strong demonstration of support and solidarity for the cause of the African children, like the one we witnessed in Dubai, and especially so at the International Humanitarian City, gives the children of Africa and humanitarian actors alike much needed encouragement. “We can help build the future of our children. This is the message I”ll take with me”,concluded Mrs. Sia Koroma.

Photograph: The representative of Princess Haya Bint Al Hussein HE Mrs. Reem Al-Hashemi, Minister of State and Chaiperson of Dubai Cares, with the First Lady of Sierra Leone, HE Mrs. Alice Sia Koroma, at the International Humanitarian City (IHC).