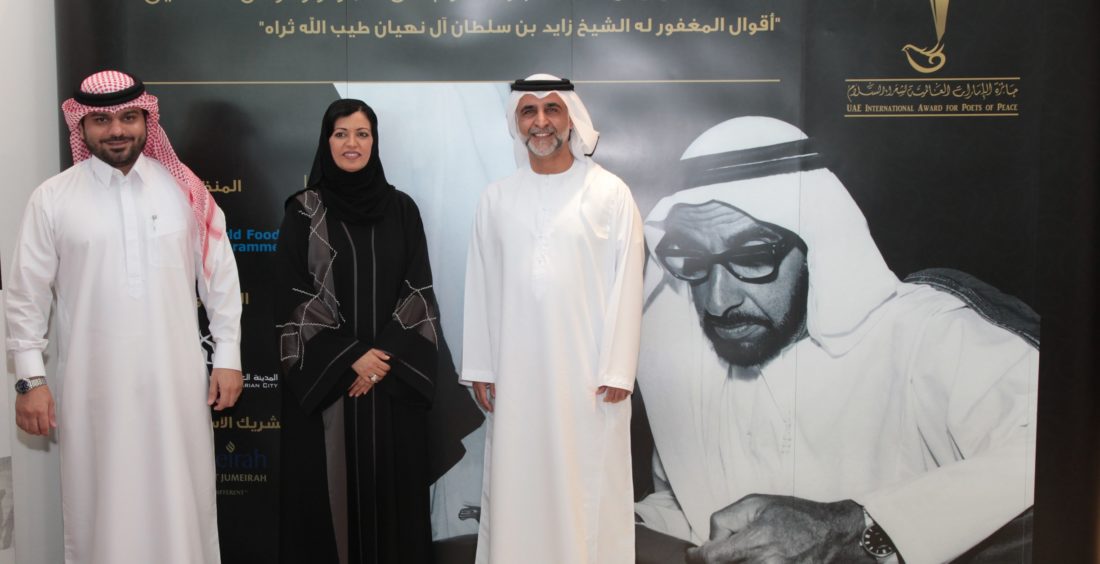 The UAE International Award for Poets of Peace was launched at a press conference held at the International Humanitarian City (IHC) in Dubai today. In cooperation with the United Nations World Food Programme (WFP) in the UAE, it is the first award of its kind, bridging a multitude of nationalities and languages in which poets will present their sonnets, spreading a message of peace around the world.

The global award aims at using poetry to spread awareness amongst people about the importance of peace and raises further consciousness for humanitarian work around the world.

Commenting on the launch of the global award, His Excellency Abdallah Al Wardat, Director of the United Nations World Food Programme in the UAE, said: “We would like to thank the UAE’s people and its wise leadership for the continuous generous support extended to the World Food Programme by hosting its regional office. We would like to invite all poets from around the world to carry the message of peace and contribute to our efforts in fighting hunger, to guarantee security and stability to all people on the planet.”

In its first season, the award comprises three initiatives: an Arab Poets’ evening, an evening for all international poets and their differing languages, as well as an event to honour poets of peace. Poets will also be honoured in three categories – ‘Culture of Peace’, ‘Religious Tolerance’ and ‘Humanitarian Values’ category. Poets of peace will be selected from all countries after they nominate themselves on the award’s website, subject to them accepting terms and conditions. Afterwards, they would be selected to attend the award ceremony in the UAE based on their poetry and its relevance across three categories.

“The award represents a platform for creative poets in the Arab World to participate in our message of peace in the region. It is the first award of its kind, as it also highlights the talents of poets and spreads cultural awareness,” said Dr Habib Ghalloum, Director of Cultural Activities, Ministry of Culture, and the Awards Cultural Consultant.

The Award’s website, www.uaepoetsaward.com, contains all information and updates, in addition to information related events and shows. The UAE International Award for Poets of Peace has also presented a special hash tag on social media #PoetsOfPeace to raise awareness of the award and encourage public involvement.

In an open invitation from the UAE to poets around the world, Dr. Aysha Al Busmait, Award Media Advisor and Consultant, said: “We welcome all poets to the United Arab Emirates and invite them to run as candidates for this renowned award. Alongside its efforts to raise the message of peace and its noble values, the award also strengthens the UAE’s position as a beacon for poetic creations from all over the world.”

The Jury will be announced during the upcoming months, while poets can enlist for the award through its website: www.uaepoetsaward.com.

Sultan Al Jasimi, General Manager, UAE International Award for Poets of Peace, WFP Advisor, concluded: “Poetry is a powerful tool to spread global peace and has become one of the most significant ways to connect people. This award will enable us to achieve the goals of our message, being the first award for poets of peace, as we will work hard to convey their messages in all languages, and promote awareness on voluntary and humanitarian efforts to support aid programmes around the world.”

At the end of the competition, names of winners of the UAE International Award for Poets of Peace will be announced in an award ceremony to be held in Dubai.

On the same note, UAE International Award for Poets of Peace supports the humanitarian society through allocating part of its proceeds to WFP– the largest international body to fight hunger. The award also cooperates with prominent partners, including the WFP and Madinat Jumeirah, and is supported by the IHC.