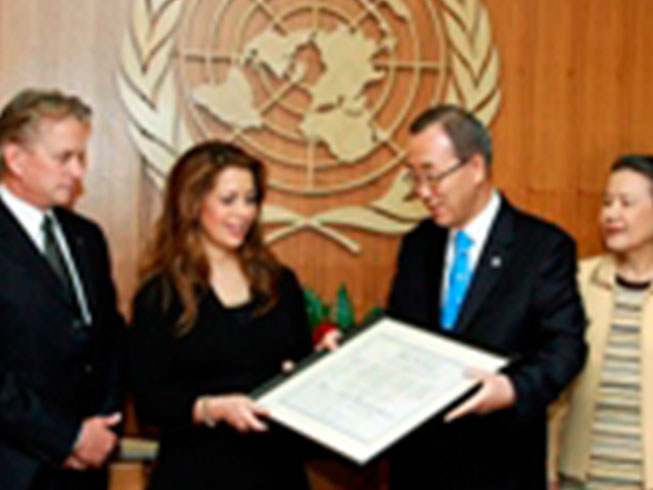 The International Day of Peace “ United Nations Secretary-General Ban Ki-moon honoured Her Royal Highness Princess Haya Bint Al Hussein of Jordan by designating Her as United Nations Messengers of Peace. She will join six other Messengers of Peace, individuals who possess widely recognized talents in the fields of art, literature, music and sports, in helping to raise worldwide awareness of the ideals and activities of the United Nations.

Known for her commitment to humanitarian causes, Princess Haya served as a Goodwill Ambassador for the World Food Programme from 2005 to 2007 and traveled to Malawi and Ethiopia to draw attention to hunger and the impact it is having on both countries. The daughter of the late King Hussein of Jordan, Princess Haya now resides in Dubai with her husband, HH Sheikh Mohammed Bin Rashid Al Maktoum, Vice President and Prime Minister of the United Arab Emirates, Ruler of Dubai.

Princess Haya is the first Arab woman to compete in equestrian events at the continental, world and Olympic levels and is now the President of the International Equestrian Federation and a member of the International Olympic Committee. She works on promoting health, education and sports issues among youth in the Arab and Muslim worlds. She also chairs the Board of Directors of the International Humanitarian City (IHC), a global humanitarian and aid hub located in an independent, free zone authority created by the Government of Dubai. IHC aims to facilitate aid and development efforts by providing local and international humanitarian actors with facilities and services specifically designed to meet their needs. As a Messenger of Peace, Princess Haya will be dedicated to helping raise global awareness of the Millennium Development Goals, including the eradication of extreme poverty and hunger.

The Secretary-General has recognized Princess Haya’s personal commitment to humanitarian work. I know you will make a compelling advocate for our shared goal of ending the suffering of the more than one billion people in the world who continue to live in extreme poverty, he said.

Consenting to serve as a Messenger of Peace, Princess Haya said that she was honoured to accept this responsibility. Referring to her work with the first ever food aid organization in the Arab world, Tkiyet Um Ali in Jordan, conceived by her late mother Queen Alia and realized after her death by her daughter, Princess Haya said, I consider it my inherited duty to help relieve the plight of people who suffer the devastating effects of poverty.

The Secretary General will also announce the designation of three other Messengers of peace along side Princess Haya Bint Al Hussein; Midori Goto, the Japanese-American virtuoso violinist, Daniel Barenboim, acclaimed conductor and pianist, and Paulo Coelho, a world renounced author and receiver of many literary global awards.

The other Messengers of Peace and their areas of focus are: Ms. Jane Goodall, the environment; Michael Douglas, disarmament and peace and security; Yo-Yo Ma, youth; and Elie Wiesel, human rights. Italian opera singer Luciano Pavarotti was a Messenger of Peace for nearly a decade before his death in Modena, Italy on 6 September 2007. Mr. Douglas, Ms. Goodall and Mr. Wiesel also will attend the International Day of Peace Observance.