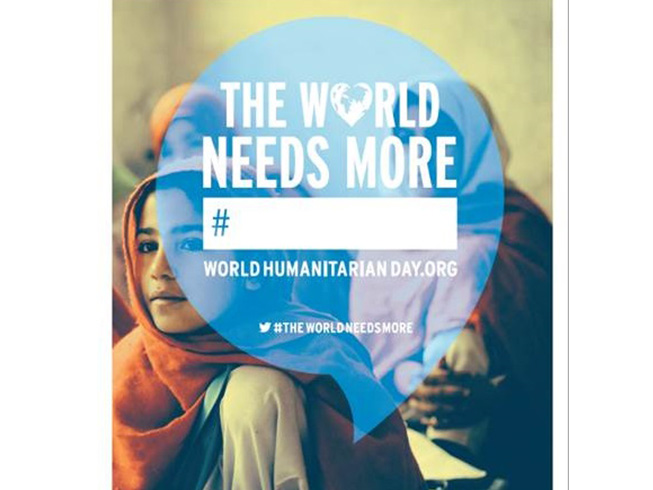 The 2013 World Humanitarian Day Campaign in Dubai came to a conclusion with thousands of people across the UAE showing their support by sharing their ideas on how to answer the question: “The World Needs More”?. The word “Peace” was the most popular word selected. The global campaign, organized by the United Nations Office for the Coordination of Humanitarian Affairs, was led in the UAE by Dubai’s International Humanitarian City (IHC). It lasted for one month after celebrations of World Humanitarian Day took place on August 19. The overall global participation for the WHD campaign which aimed at ‘turning words into reality’ surpassed 1.5 million, with the most votes for the word “Education”. Dubai’s IHC collaborated with its UN and private partners and celebrated WHD at the Dubai Mall with participants from around the country in an event which showcased the interactive WHD 2013 campaign theme. Exceeding last year’s participation, more than 11,000 individuals from over 43 nations came to the exhibit, and over 5,000 of them were participants on the day of celebration. Delegations present included representatives from Dubai Police, Dubai Airports, Tecom, Genera Directorate of Residency and Foreigners Affairs, Dubai Cares, Dubai Healthcare City, UAE Red Crescent, Khalifa Foundation, and Dubai World Central. Support for the campaign continued throughout the month. The IHC kept its WHD interactive application running on its social networks where over 32000 participants from 102 nationalities selected words. After “Peace”, the top words chosen were “Love”, “Care”, “Humanity” and “Respect”. Local media organization Dubai Media Incorporated supported the campaign through its media outlets and TV spots in which WHD films were running during the month of the campaign. UAE-based conglomerate Crescent Enterprises added its support to the campaign by sponsoring the word “Entrepreneurs” which reflects the importance of private sector contribution to the humanitarian field. Every time this word is selected, USD1 is donated to the Global Humanitarian Appeal which focuses on meeting humanitarian needs including food, healthcare, and education. The IHC would like to express its appreciation to all the supporters including Etisalat, Dubai Media Incorporated, Expo 2020, Watani, Emaar and the Dubai Mall, who helped raise awareness about the campaign and contributed to the growing role of the UAE in the humanitarian field. The IHC looks forward to further expanding the campaign in next year’s WHD event.